Securing Major Givers: How to Keep Them Involved to the End 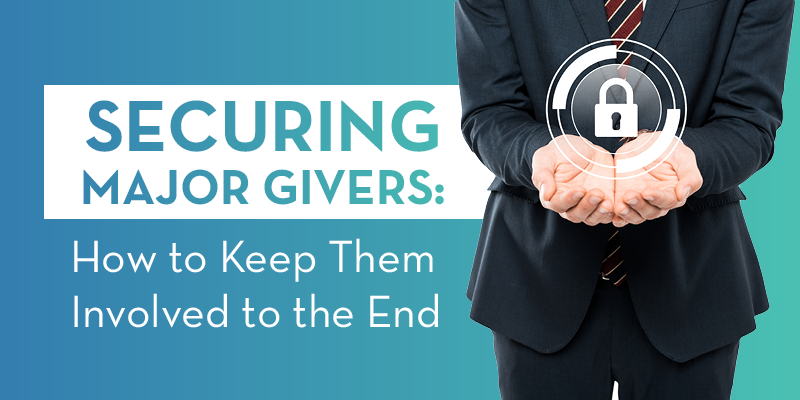 Let’s say you’ve launched a capital campaign to renovate your nonprofit’s facility. At the beginning of the project, you secure a handful of major donors who will support the larger financial costs of the investments. Months later, with lots of hard work, you’ve raised the rest of the funds from mid-level and smaller donors and, after a year of construction, the project is finally completed.

However, as you’re about to cut the ribbon to unveil the renovation, you look around and notice that some of the major givers who you connected with early on in the project have not made an appearance. In fact, you realize, you haven’t had many conversations with them in months.

Although much of your time and energy at the beginning of a capital campaign goes into securing major donors, it’s possible that your team’s attention might drift away from them as the campaign unfolds. While it’s understandable that your focus needs to shift once you kick off the public phase of your campaign, this shouldn’t mean that contact with your major donors gets left behind.

Development differs from typical fundraising in that it requires a much more personal touch. It's a far more meaningful experience for major donors if you make a concerted effort to keep them involved in the campaign.

But how can you keep these major givers engaged with your campaign after they’ve already donated or pledged their gift? Here are some tested strategies you can use to ensure that your major donors are present on that big unveiling day:

Whether you connect with your major donors in person or during a virtual event, staying in touch with them throughout a capital campaign is critical. Not only will continued contact reassure major givers that they’ve made a worthwhile investment, but it will also increase the likelihood that your nonprofit retains these important donors. Let’s take a closer look at these strategies to keep major donors involved!

Major donors are passionate about your cause, so it’s likely that many of them will enjoy opportunities to get more involved with your mission. One of the best ways to encourage major donors to play a more active role in your nonprofit is by launching an ambassador program. Some nonprofits might also call this a “major donor society.”

A nonprofit ambassador program invites passionate supporters to represent your organization in order to increase your visibility in the community. You can recruit ambassadors for a variety of reasons, from promoting an upcoming event like an auction to spearheading your nonprofit’s awareness campaign or assisting with general, year-round fundraising efforts.

If you decide to launch an ambassador program for your major donors, consider these tips:

An ambassador program might not be the best fit for every major donor, but it’s a great option for those supporters who have free time and want to continue proactive involvement with your capital campaign and your organization. Plus, an ambassador program can be huge asset for your ongoing stewardship and retention efforts over time.

Because major donors play a significant role in your capital campaigns, it’s a good idea to ask for their input, both on your current project and how your nonprofit is doing overall. As a major giver, these donors likely have unique insight into the nonprofit sector and ways in which your nonprofit could more effectively connect with other major donors.

Before your campaign even begins, you’ll likely conduct a feasibility study to gather major donors’ input upfront. However, there’s no reason why you can’t show that you value their insight even after you’ve secured their support.

Consider scheduling check-in times throughout your capital campaign. This way, you have established opportunities to ask for feedback about the campaign’s progress. Your major donors will appreciate that you value their opinion, even more so if you actually implement some of their ideas.

If your major donors do not have time to meet, there’s no harm in sending over a survey asking for their input. With a survey, it’s their choice to fill it out or not but, regardless, you have given them a convenient opportunity to share their valuable insight.

Lastly, if you arrive at a crossroads in your capital campaign, don’t be afraid to reach out to your major givers for their thoughts. Since they provided a large contribution, major donors will appreciate being made part of your nonprofit’s story and may even help you make the right choice!

Provide regular updates, but not too many.

Another simple way to keep major donors involved is to send regular updates. With a brief update, you’ll stay on your donors’ radars even if they cannot commit to additional responsibilities.

However, be careful not to send too many updates. A full inbox might irritate major donors who feel as though they have already made a large contribution. To avoid bothering your major donors, consider these tips to keep your updates as effective as possible:

While it’s very important to keep major donors in the loop about the progress of your capital campaign, you don’t want to overwhelm them with emails or text messages. The exception might be if they’ve elected to participate more actively as a volunteer or ambassador, in which case you should follow your typical volunteer communication strategy.

The best rule of thumb is to keep communication open with your major donors so that you know how frequently they want to hear from you.

Once your capital campaign draws to a close, hosting a celebratory event is a great way to commemorate everyone’s hard work. It will also give you the opportunity to reconnect with major donors and publicly thank them for their generosity.

If you plan to host a celebratory event, especially if it’s towards the end of the year, send your major donors an invitation early so that you can snag a spot on their calendars.

There are all kinds of celebratory events you could host, but here are our favorites:

When planning your event, consider offering both in-person and virtual options for convenience. Hybrid events might be much easier for major donors to attend, whether they live far away or have a busy schedule. This way, you increase the likelihood that a major donor will see the impact of their contribution, forging a stronger long-term connection. If you’re unsure about how to plan this type of event, this OneCause guide on hybrid events can help you get started.

Maintaining engagement with your major donors is important not just for your current capital campaign, but for your nonprofit’s continued fundraising success through increased retention. While you should work towards building strong relationships with all of your supporters, prioritizing frequent touchpoints with your major donors can help them feel more connected to your organization. Plus, it’s the least you can do to thank them for their generosity and support!

Kelly Velasquez-Hague brings over 20 years of fundraising, nonprofit management, and sales/marketing experience to her role as the Director of Content Marketing for OneCause. As a member of the OneCause sales and marketing team, Kelly manages all of the company’s content strategy and execution. She is passionate about empowering great missions and loves that her current role allows her to continue to help nonprofits reach new donors and raise more funds for their cause.